The number one problem during Carnival 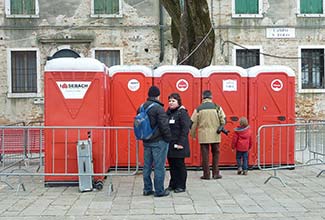 ABOVE: Portable toilets in the Campo San Polo. INSET BELOW: The high price of responsible behavior.

For the convenience of Carnivalgoers, the city of Venice has installed portable toilets at strategic locations around town.

But there's also bad news for visitors who need to go, and for the spazzini who need to clean up after they've gone:

It can cost a euro to use a biffy, and tipsy revelers are likely to prefer whizzing in the open air (as we've seen them do) to wasting money that could be spent more enjoyably on a beer or spritz.

Bottom line: In Venice at Carnival time, the man who turns his back on you probably doesn't mean to be rude--he's just trying to save the price of a visit to the porta-loo.

Venice Carnival is now underway, and the Campo San Polo (which is about a block from our apartment) has been equipped with a temporary ice-skating rink and a carousel.

At 11 p.m., we passed the rink with our dog Maggie when we saw a group of kids skating together, doing conga lines and a group hug. It was a refreshing change from watching drunk twenty-somethings urinating in streets and canals during the first evening of Carnevale.

You can see the skaters in action below: 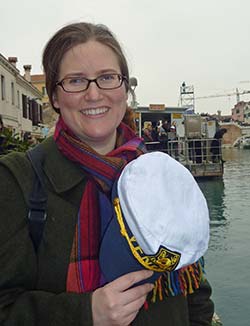 ABOVE: A Loden-coated capitana pledges allegiance to the pantegana who stars in the "Flight of the Rat" on Venice's Cannaregio Canal.

Venice's Carnival normally runs for 11 days. In 2011, however, the organizers added a preview weekend on February 19 and 20, possibly because Carnevale is so late this year (February 26-March 8).

Today (Sunday, February 20), locals celebrated a "Venetian Festival on the Water" as an alternative to the more tourist-oriented Carnival events in the Piazzo San Marco.

In laate morning, a boat parade headed down the Grand Canal, turned right into the Cannaregio Canal, and finished up at the Ponte dei Tre Archi.

There, at noon, the mayor and other local officials gave their official blessing to the second annual Svolo della Pantegana or "Flight of the Rat," which is a good-natured parody of the annual "Flight of the Angel" in the Piazza San Marco (an event where a celebrity in an elaborate costume descends into the square on a cable while crowds of tourists, costumed bigwigs, and TV crews look on).

After landing in the canal, the giant rat replica floated amid the boats while onlookers headed for stands along the canal that were serving free food and wine supplied by local restaurants. The atmosphere was good-natured and unpretentious, and the crowd--though large--wasn't nearly so overwhelming as the mob that will clog the streets around the Piazza San Marco next Sunday.

Below are two videos that Cheryl took today: one of the boat parade, and the other showing the "Flight of the Rat" immediately afterward.