We've just launched our "Maggie in Venice" dog blog, which is subtitled "A Bearded Collie's Adventures in Italy."

Maggie will arrive in Venice on January 30 for a three-month stay, and we'll be publishing regular updates with photos and videos--including a "Where's Maggie?" segment for Venetophiles who'd like to test their knowledge and memories of Venetian landmarks.

You'll find our Maggie in Venice dog blog at maggieinvenice.com. 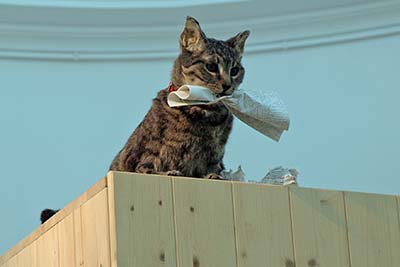 One of the much-discussed objects at the 2009 Biennale di Venezia was Liam Gillick's "Cat," an animatronic creature that talked to German Pavilion visitors in three languages. Cat-lovers found the work adorable--assuming that its realism didn't make them uneasy. (Were any animals harmed during the making of this artwork? We hope not, although the work's taxidermic accuracy might be enough to raise feline hackles.)

Where have Venice's cats gone? 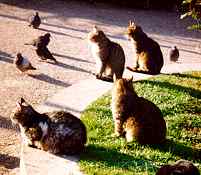 RIGHT: Cats in Venice's former royal gardens. (The photo was taken in December, 2005.)

Not so many years ago, Venice wasn't just soaked by acqua alta floodwaters--it was also awash in cats. Stray cats, like pigeons, were a symbol of Venice, and--unlike their avian colleagues-the city's gatti were cherished by local citizens who often put out food for the cats and relied on them to keep rats under control.

Over the last two decades, however, Venetian Lagoon's feral-cat population has dropped from an estimated 12,000 to about 2,000, thanks to a city-supported program of sterilization and relocation by Dingo, a Venetian animal-protection organization. In 1989, Dingo opened a cat sanctuary on the island of San Clemente, the site of a former mental hospital. After the island was sold for redevelopment as the luxurious San Clemente Palace Hotel, Dingo moved its sanctuary (and the cats) to a new location at Malamocco, on the Lido, where it's still in operation.

For an illustrated look at Venetian felinity in its heyday, see our Cats in Venice article (which was written in 1997 but has been updated) and our tribute to Neno, who may have been Venice's Oldest Cat when he reached the ripe age of 22.