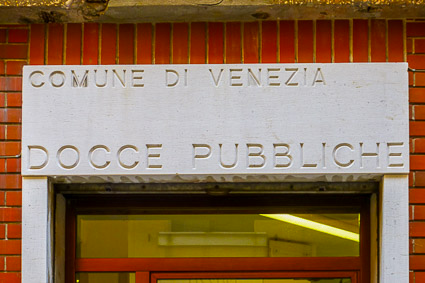 Venetians and Venetophiles often wax nostalgic about the days when central Venice had more than 150,000 residents. (Since World War II, the centro storico's population has dropped to about 58,000.) They conveniently forget how many of those old-time Venetians lived in overcrowded apartments without modern conveniences.

In the photo above, you can see the entrance to municipal showers in the city center where poorer Venetians once went to bathe. Today, the showers are gone, having been replaced by public toilets.

The toilets are expensive--1,50 euros for tourists, less for locals--so it shouldn't be surprising that some visitors and residents whiz directly into canals. (And why not, you may ask, since most of Venice's raw sewage is flushed into the canals anyway?) This is not a good idea, especially if you've been drinking, since tipsy tinklers have been known to slip, fall into canals, and drown. We once saw a body floating in a canal near our apartment in San Polo the morning after Martedi Grasso, or "Fat Tuesday," when boozing and canalside urination are rampant.

As we arrived at the train station in Venice we entered in another world. And what a world! Old buildings everywhere, water, boats, a lot of people, I could cry for happiness! In my view, Venice is unique. I went with my husband to San Marco, I did not know where to look first: showcases that look at you, masks that are most beautiful, other showcases with goodies (we also tasted something), gorgeous buildings over which the patina of time has fallen and that makes you feel like you are part of old times. I was a princess for a day! The master followed me quietly on all the streets, in my periplus to San Marco, he enjoyed my happiness and at the end of the day he recognized that he was finally conquered by Venice. :)