A sewage boat in Venice 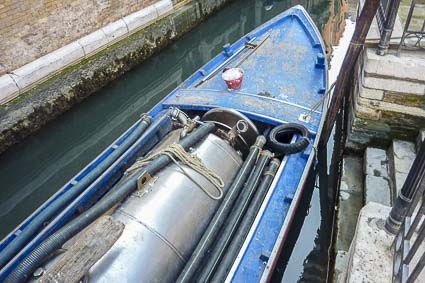 ABOVE: A sewage boat arrives to collect the contents of a septic tank or a "pozzo nero" (cesspool) in a Venice storefront.

Sewage isn't the most appealing travel topic, but if you're at all interested in urban infrastructure, you might as well learn where things go when you do.

Most of Venice's sewage goes directly into the city's canals. Flush a toilet, and someone crossing a bridge or cruising up a side canal by gondola may notice a small swoosh of water emerging from an opening in a brick wall. In theory, such waste is supposed to be purified by septic tanks, but such systems are the exception, not the rule. (Septic tanks are most common in restaurants, hotels, and other structures that have been gutted and renovated in recent years.)

From time to time, septic tanks need to be emptied by a pozzo nero ("black well") boat, which hauls the muck away. Buildings that use cesspools to store untreated waste also need an occasional pumping-out. In the photos and video on this page, you can see how the process works.

BELOW: A hose runs from the boat or barge to a temporary sewer pipe on shore. 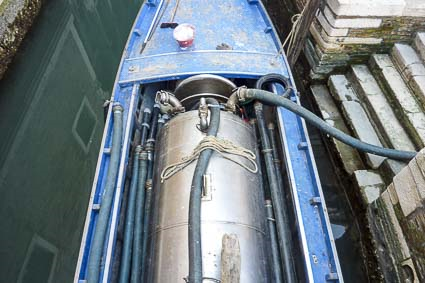 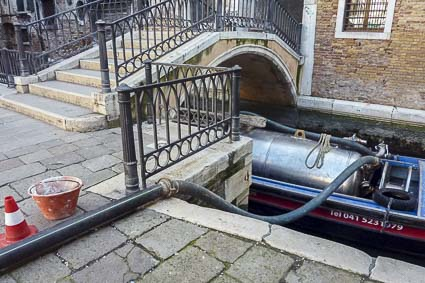 BELOW: The sewer pipe runs across a square into a storefront where a pump draws sludge or waste from an underfloor storage tank. 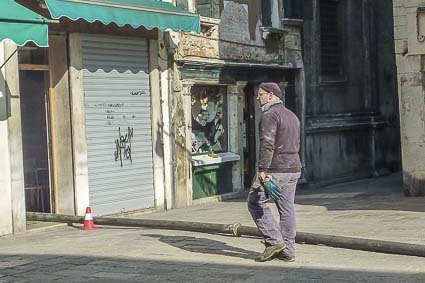 BELOW: This video shows a sewage boat pumping waste and cruising away after sucking up a tankful of muck.