The truth about cruise ships in Venice 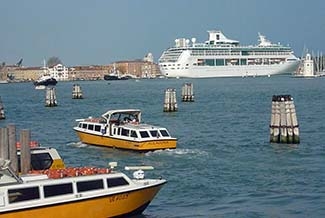 ABOVE: Royal Caribbean's Splendour of the Seas cruises through St. Mark's Basin. (The boats in the foreground are Alilaguna water buses, which serve airport passengers and tour groups.)

If you follow the popular press (especially British tabloids and broadsheets), you've probably read a great deal of misinformation about cruise ships in Venice--such as the allegation that cruise ships are "going down the Grand Canal" (a local waterway that is traversed by four footbridges and isn't deep enough for anything larger than a water bus).

You may also have read that large cruise ships will be banned in Venice after November 1, 2014, and that Italian authorities will be dredging a new shipping channel to carry cruise ships larger than 40,000 tons to the Marittima cruise terminals via a backdoor route instead of down the existing Giudecca Canal (which is designed to accommodate large ships): 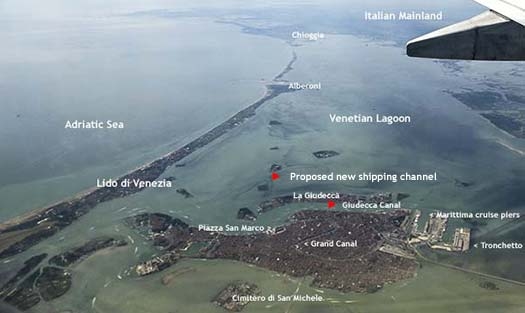 In reality, very little is likely to change. The only ships being banned are ships larger than 96,000 tons (very few of which call in Venice), and if Venetians are lucky, the proposed new shipping channel will never be dredged for several reasons:

1. A new shipping channel would be environmentally destructive.

The Venetian Lagoon is a fragile ecosystem that depends on flushing by tides from the Adriatic Sea to carry out sewage, maintain a balance between sea and fresh water, and nourish underwater life.

Experts have called for reducing the average depth of the Lagoon and restoring salt marshes where possible. A new shipping channel would be the exact opposite of what is needed. (See Venice in Peril's report on the effects of dredging in the Venetian Lagoon.)

2. Venice already has a channel designed for large ships.

The Giudecca Canal (the main route between St. Mark's Basin and Venice's cruise piers) is a deepwater channel that was heavily reinforced 10 or 15 years ago to prevent erosion by passing ship traffic.

The canal is far safer environmentally than a new shipping channel behind the island of Giudecca would be, because--to borrow a phrase from Venice in Peril--it has "borders to limit sediment re-suspension on either side."

In other words, cruise ships that pass through the Giudecca Canal aren't stirring up the Venetian Lagoon's muddy bottom and disturbing marine life (unlike cargo ships, which have been following a deep channel in the open Lagoon since the late 1960s with unfortunate results).

3. Corruption and government inefficiency are likely to torpedo any large-scale dredging plan.

Venice's much-heralded MOSE flood-control project has been a financial disaster. This past summer, 14 officials of the Consorzio Venezia Nuovo (the conglomerate behind the MOSE project) were arrested for contract-rigging and other offenses.

(One might think that, after the MOSE scandal and the Calatrava Bridge disaster, city officials would be too embarrassed to float new construction proposals.)

Now let's examine several other facts that the tabloid press have ignored:

In 2012, more than 4,500 local businesses confirmed their support of the Venice cruise industry. Robert Magliocco, president of Ascom Venezia, said that tourism-related economic activity should be seen as "added value, not as a problem. We need to hear from people who work and produce, not those who want to turn Venice into a ghost town."

The FAQ at www.cruisevenice.org states:

"Cruise passengers alone spend almost €150 million in the city a year, without taking account of the direct and indirect effects of public and private spending on infrastructures, or the effects the cruise economy has on employment. Italy accounts for €4.5 of the €14.5 billion economic impact of the cruise industry in Europe, and 100,000 of the 300,000 jobs the cruise industry generates. Venice is the European cruise capital, receiving from this industry a large proportion of its lifeblood. The impact of the industry extends well beyond the direct effect it has, boosting the diversification of the city's economy away from the single tourism culture."

Other points worth noting:

The Port of Venice has already taken unilateral steps to minimize negative effects of cruise ships.

A few years ago, the port made the foolish decision to let large cruise ships moor along the Riva dei Sette Martiri (above the Piazza San Marco) during day visits. Here's a photo from 2009: 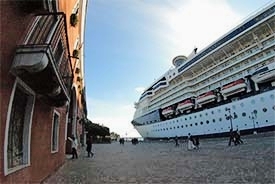 Today, the Riva dei Sette Martiri is off-limits to large ships, which now are restricted to the Marittima and San Basilio cruise terminals.

As a bonus, air pollution is reduced because the main cruise piers now offer "cold ironing" or shore power for cruise ships, making it unnecessary for ships to generate their own electricity during port visits.

What remains to be done:

The real problem with cruise ships isn't the ships themselves; it's the city's unwillingness to discourage the more annoying and environmentally-destructive effects of mass tourism.

Whether tourists are arriving on ships, by train, by airplane, or on thousands of tour buses, there are simply too many people clogging the main thoroughfares around the Piazza San Marco during peak tourist periods.

Several steps could be taken to reduce the crush:

1. Stop expanding parking facilities for tour buses and cars on the Tronchetto parking island. (Tronchetto currently has spaces for 500 tour buses--and that doesn't include buses that merely drop off passengers in Venice's historic center before returning to the mainland.)

2. Restrict the number of private motoscafi (water buses) that serve tour groups. This would discourage daytrippers, reduce traffic congestion and erosion along the waterfront, and put a dent in crowding around the major tourist sites.

Would such changes be unpopular? Sure. But they'd be more effective than posturing about spending tens of millions of euros to destroy the Venetian Lagoon for the sake of a few NIMBY votes.

For more about cruising from Venice, see:

Venice for Cruisers at Veniceforvisitors.com