ABOVE: This nine-minute video offers a great overview of the Venetian Lagoon, the Lido di Venezia, and the islands that surround Venice's historic center.

If you've seen our satellite-image orientation map at Veniceforvisitors.com, you know that Venice is a cluster of islands in the Venetian Lagoon, which is separated from the Adriatic Sea by the Lido di Venezia (a long, narrow resort island). And if you've flown into Venice's Marco Polo Airport, you may have enjoyed a real-time overview of Venice and its Lagoon from the air.

For an even better birds'-eye view of Venice, you can book a private helicopter tour with Heliair, which offers trips of six minutes to half an hour from Nicelli Airport on the Lido di Venezia.

Rates aren't cheap--you'll pay anywhere from 75 to 330 euros per person, depending on the length of the tour--but if you've got the cash, Heliair can provide you with a breathtaking experience.

BELOW: In a hurry? This YouTube video clip (taken by a passenger) is just over 3-1/2 minutes long and covers the high points of a tour.

Hotel Excelsior gets a facelift 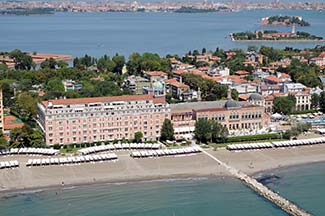 ABOVE: The Hotel Excelsior faces the Adriatic Sea, with its own private beach. In the background, you can see the Venetian Lagoon and Venice's historic center.

The Hotel Excelsior on the Lido di Venezia, Venice's resort island, has been renovated for the 2013 season. The five-star luxury hotel reopened on April 10 after its winter hiatus with new carpeting, restored tapestries, replacement of bathtubs with large showers, new plasma TVs, and free Wi-Fi throughout the hotel premises (including the Excelsior's private beach).

The Moorish-style Hotel Excelsior has attracted well-heeled resort guests to the Lido since July 21, 1908, when some 3,000 invited guests and 30,000 Venetians attended the palatial hotel's opening-night festivities. (See hotel history.) In 1932, the Venice Film Festival made its debut in the Hotel Excelsior.

The Excelsior is a bit out of the way for city people like us, but if you're visiting Venice in the summer and you'd like to sit on a beach or enjoy a drink by the Adriatic after a day of sightseeing--and if you can afford the rates--it's a tempting place to stay.