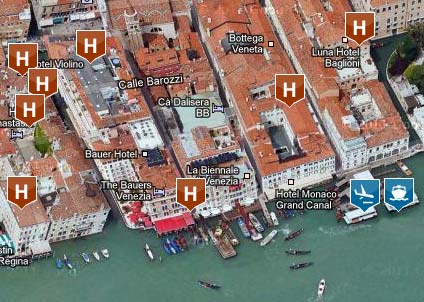 ABOVE: A small section of a full-page map that shows hotels near the San Marco Giardinetti waterbus stop and the Piazza San Marco.

In the last few days, we've begun rolling out a new feature on our Venice for Visitors travel-planning site: a collection of interactive, full-page Venice Hotel Maps. These large, easy-to-read satellite-photo maps are based on Google Maps, which we've annotated and enhanced with commercial map-building software.

Unlike standard Google Maps, our Venice Hotel Maps have large, legible hotel icons. Just as important, we've placed the icons on the map manually, using our knowledge of Venice and our recent notes and photographs as references. This is a big improvement over standard Google Maps or the maps used by hotel-booking services, where markers are often based on GPS coordinates that can be inaccurate in crowded urban settings.

When you move your cursor over an "H" icon on a Venice Hotel Map, you'll see the hotel's name. Click on the icon, and you'll be taken to a mini-site for that hotel at Venere, a Rome-based subsidiary of Expedia that has negotiated discount rates with thousands of hotels throughout Italy. (In the few cases where Venere doesn't represent a hotel, we've used Booking.com as a backup.)

Tip: When using our Venice Hotel Maps, pay attention to the blue transportation icons. In the partial screen shot of our Piazza San Marco map above, you can see two blue icons at San Marco Giardinetti: one for the Alilaguna airport boat, and one for the ACTV vaporetto or public waterbus. If you're a slow walker or you're traveling with heavy luggage, you may find it convenient to choose a hotel near a boat stop.

Addendum (September 9): Since writing this post, we've added a new section to our Venice Hotel Maps. It's titled "Hotels near Alilaguna Airport Boat Stops," and it's just what the name implies: a collection of maps that show hotels within one bridge (or, in many cases, no bridges) of the Alilaguna airport boat's Linea Blu (Blue Line) and Linea Arancio (Orange Line).

To make it even easier to find hotels, we've created an "Orientation Map" (see screen capture below) with icons for Venice's cruise terminals, airport buses, taxis, Alilaguna Orange and Blue Line airport boats, etc. Click on an icon, and you'll be taken to the relevant map.

To get started with our Venice Hotel Maps, please click here.

BELOW: A reduced-size screen capture of our new Venice Orientation Map with clickable icons. 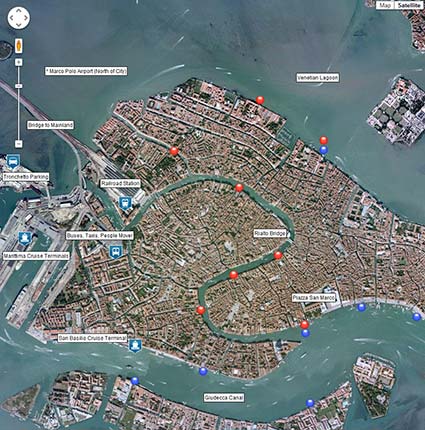