A tram from Mestre to Venice's Piazzale Roma 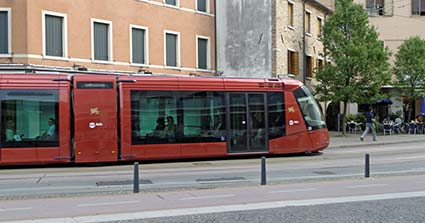 ABOVE: An existing tram in Mestre, on the Venetian mainland.

2015 Update: After many delays, the T1 tram from Mestre to Venice entered service in September, 2015.

The tram is most convenient for visitors who are staying in hotels along the northern edge of downtown Mestre.

For details and hotel listings, see our Mestre-Venice Tram article at Veniceforvisitors.com.

Come to Venice in 2014, and you should be able to ride an electric tram between Mestre or Marghera on the mainland and Venice's Piazzale Roma. Road work for the new line began on the Ponte della Libertà (the causeway between the mainland and Venice) a few days ago, and when the project is finished, commuting from Mestre or Marghera to Venice will be easier for locals and tourists alike. (Trams will run every five minutes. or even more frequently than trains and buses do now.)

The tram line from Mestre to Venice is part of a larger two-line network that began with the opening of the original Mestre Tram line in December, 2010. The system, which uses the Translohr "guided bus" technology, employs rubber-tired trainsets with a central guide rail.

For an overview of the planned network, with maps and photos, see the Comune di Venezia's rendering in PDF format.