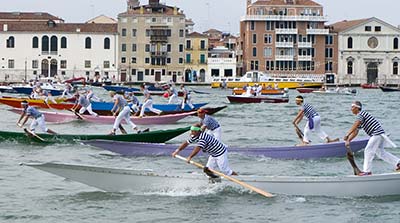 ABOVE: A rowing race on the Giudecca Canal during last year's Festa del Redentore.

Every summer, Venice has a celebration called the Festa del Redentore, which translates as Feast or Festival of the Redeemer. The two-day event dates back to the 1577, and it commemorates the city's deliverance from a plague.

During the festival, a temporary pontoon bridge is floated into place on the Giudecca Canal. Thousands of Venetians and tourists walk from the historic center's Dorosoduro district to the island of La Giudecca, where the local Roman Catholic patriarch addresses the crowd from the steps of the Redentore ("Redeemer") Church. Other activities during the weekend include a mass, rowing races, and a huge fireworks display.

In this video, you can see the pontoon bridge and the boats that crowd into St. Mark's Basin and the Giudecca Canal on the opening day of the Festa.

Look carefully, and you'll see a barge with a porta-potty, an ambulance, and--perhaps a bit oddly--a boat of the Polizia Penitenziaria, the Italian prison police.

Our second video was taken from the Dorsoduro end of the pontoon bridge between the historic center of Venice and La Giudecca. It begins with a shot of a man tending his boat's barbecue in the foreground; after that, you'll see short excerpts from the brilliant fireworks display, which lasted about half an hour.