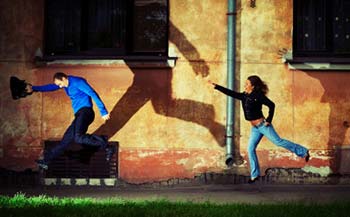 ABOVE: Snatch-and-grab thieves aren't common in Venice, but pickpockets and purselifters prey on tourists--especially during high season or on busy holiday weekends.

Venice is a city that can look and feel creepy, especially at night. But don't let its narrow streets and dark alleys alarm you: Violent crime is rare in Venice, and you can walk anywhere in the historic center with virtually no risk of being murdered, mugged, or raped.

Non-violent crime is a different story. Like many tourist cities, Venice attracts its share of pickpockets, purselifters, and camera thieves. A moment's carelessness can be expensive, as these stories illustrate:

Fortunately, such incidents are easy to avoid. Just observe these common-sense rules:

Please note: For some readers, the advice in this post may seem obvious or condescending. But let's face it: Travelers are victims of pickpockets and other silent thieves every day. In our opinion, even experienced travelers can benefit from an occasional reminder to be vigilant.