Getting to Marco Polo Airport from the Venice train station 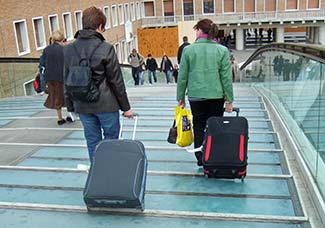 ABOVE: Venice's Ponte di Calatrava, or Calatrava Bridge, links Santa Lucia Railroad Station to the Piazzale Roma (where you can catch a bus or taxi to the airport).

From time to time, we're asked about train transportation between Venice's Santa Lucia Railroad Station and Marco Polo Airport. The short answer is simple: "There isn't any."

Fortunately, you don't have to settle for the short answer. It's easy to get to Marco Polo Airport from the main Venice railway station (called "Ferrovia" on local transportation maps), and here's how to do it: 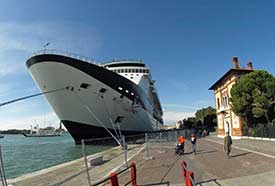 ABOVE: Thanks to a new decree by the Port of Venice, megaships like Celebrity Summit will no longer be allowed to moor along the waterfront above the Piazza San Marco when they're visiting Venice for the day.

Seatrade Insider, an online newsletter for the cruise industry, reports that Venice is tightening up its restrictions on cruise ships in the wake of the recent Costa Concordia incident.

For example, ships larger than 40,000 GRT (which includes most ships of lines such as Celebrity, Costa, Holland America, MSC, Princess and Royal Caribbean) will be subject to the following rules:

The Seatrade Insider article didn't cite an implementation date for the new rules, so it's too early to tell how many of this year's cruise departure and arrival times will be affected. If you're cruising from Venice this year, watch for e-mails from your cruise line and check the Venezia Terminal Passeggeri's ship schedules for pier assignments, arrival times, and departure times.

Uniworld will cruise from Venice in 2013

ABOVE: Uniworld's River Countess in Budapest.

A decade ago, several river-cruise lines offered cruises of the Venetian Lagoon and Po River Valley from Venice. The number of ships in the Lagoon dwindled over the years, but lately there has been a resurgence. In 2012, two river-cruise companies--France's CroisiEurope and Germany's Nikko Tours--have regularly-scheduled departures from Venice's San Basilio cruise terminal. In 2013, they'll be joined by a top-tier American company, the Uniworld Boutique River Cruise Collection, which is moving River Countess from the Rhine, Main, and Danube to Venice.

The 134-passenger River Countess is being remodeled prior to the move. River Countess--which has 63 stateroom and four suites--offers such features as free Wi-Fi, French balconies on upper-deck staterooms (see deck plan below), and a fitness center for passengers who feel the need for activity when they aren't sightseeing on shore.

Uniworld is offering its Venice and Po cruises as part of a 13-night "Splendors of Italy" tour that includes several days in Florence in Rome. Guests can choose a 7-night "cruise only" option, which starts and ends in Venice. The Venice cruise portion of the itinerary includes local sightseeing tours in Venice and the Lagoon town of Chioggia, along with excursions to Padua, Revenna, and Verona.

For details of Uniworld's 2013 Venice and Po cruises (including a discount of US $1200 per couple for prepaid bookings before June 30, 2012), see the "Spendors of Italy" pages at Uniworld.com.

Related article at Venice for Visitors:

BELOW: A current ship profile and deck plan of Uniworld's River Countess. 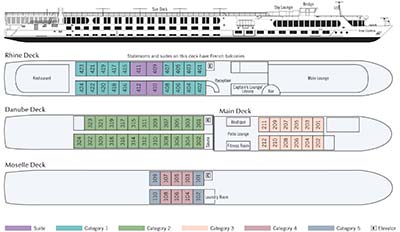