New book: 'The Midwife of Venice' 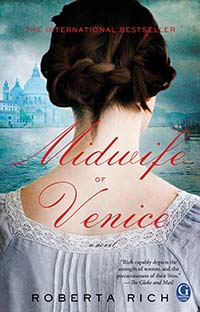 ABOVE: The cover for the U.S. edition of The Midwife of Venice, which was published by Simon & Schuster's Gallery Books on February 14.

Roberta Rich, an American-born author, has written an historical novel titled The Midwife of Venice that's likely to be of interest to Venetophiles and anyone with an interest in European Jewish history.

Here's an official blurb for the novel, which is set in the Venetian Ghetto:

"Hannah Levi, a midwife in the Venetian ghetto, has gained renown for her skill in coaxing reluctant babies out of their mother’s bellies using her 'birthing spoons,' a rudimentary form of forceps. One night a Christian nobleman, Conte Paolo di Padovani appears at Hannah’s door in the Jewish ghetto with an impossible request.He implores Hannah to help his dying wife and save their unborn child. But a Papal edict has made it a crime, punishable by death, for Jews to render medical treatment to Christians. The Conte offers her a huge sum of money, enough to enable her to sail to Malta to ransom her beloved husband, Isaac, who has been captured at sea and is a slave of the Knights of St. John.

"Against the Rabbi’s advice, Hannah goes with the Conte and delivers the infant, Matteo, a child who captures her heart.  As she prepares to depart for Malta to rescue Isaac, she discovers that the baby’s uncles are plotting to murder the baby in order to seize the family fortune.  In the absence of the Conte and his wife who are in Ferrara on urgent family matters, there is no one but Hannah to save Matteo. She enlists her sister Jessica who is a courtesan and living as a Christian outside the ghetto. An outbreak of the plague traps them in Venice and makes them easy prey for the baby’s murderous uncles.

"Woven through Hannah’s travails are Isaac’s hardships as a slave in Malta. Blessed with wit and charm, he earns scraps of food as a scribe and pins his hopes for freedom on bartering his precious silkworm eggs. To reach Isaac, who believes she has died in the plague, Hannah must outsmart the di Padovani family and sail to Malta before Isaac manages to buy his passage to a new life in Constantinople."

The Midwife in Venice has been published in the United States, Britain, Canada, Germany, and Turkey. Elle Magazine describes the book as "a lavishly detailed historical novel," and Publishers Weekly writes: "In her U.S. debut, Rich successfully captures the seedy side of 16th-Century Venice--the Jewish ghetto, the plague, the confluence of religious and legal authority....Isaac comes to full life: his thoughts, feelings, humor, and behavior leap off the page."

For more about the book (including a sample chapter), visit the author's Web site at robertarich.com.

'Aerial Venice' at Venice for Visitors

We've just launched a new section of Venice for Visitors. It's called "Aerial Venice," and it's designed to let you explore Venice from above before your visit.

The site makes use of Google satellite-photo maps. Each image measures at least 750 x 500 pixels (which is fairly large, as such maps go), and the typical page has two pictures:

1. A satellite-photo map that looks straight down and gives an overview of the featured location and its surroundings.

2. A close-up or "bird's eye" view, usually at a 45-degree angle, that matches what you might see in the final minute or two of a parachute descent.

To provide a more enjoyable experience, we've avoided the use of the teardrop-shaped markers and dialogue balloons that clutter and hide details so many Google-based photo maps. Instead, we've preceded each set of images with a description of what you'll see. (We've also included links to related Aerial Venice pages and Venice for Visitors articles in our descriptions.)

Aerial Venice topics range from major squares and sights to transportation hubs such as the Santa Lucia Railroad Station, the Piazzale Roma, Venice Marco Polo and Treviso Airports, and the Venice cruise port. We've also created pages for the Lido di Venezia, Murano, Burano, and several other islands in the Venetian Lagoon.

If you'd like to see our Aerial Venice gallery, simply click the link below or type the name into your browser:

"Introducing Venice" at Venice for Visitors 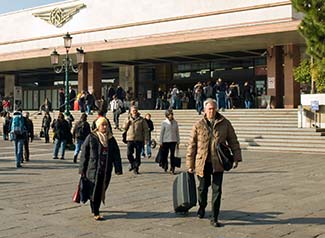 ABOVE: Santa Lucia Railroad Station is on the edge of Venice's centro storico or historic center.

We've just published an article at Venice for Visitors that we should have written long ago: It gives an orientation and overview of Venice in three easy-to-read pages.

The article is titled "Introducing Venice," and it covers several important topics:

If you're visiting Venice for the first time, this quick tutorial will help you avoid confusion, and it could save you from making costly and frustrating planning mistakes. To read it, go to: