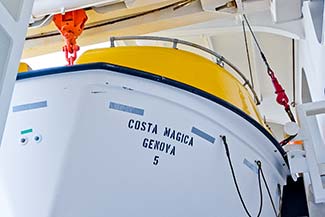 ABOVE: A lifeboat on Costa Magica, which we reviewed at Europe for Cruisers last month.

In the aftermath of Costa Concordia's sinking off the Italian coast on January 13, it's easy--and perhaps unfair--to be a Monday-morning quarterback. Still, it isn't unreasonable to wonder why a modern cruise ship listed and sank like a latter-day Titanic after running aground in the Mediterranean.

In fairness to Costa Crociere, the Concordia was built to the same standards as other recent vessels. (It even shares a "platform" with several other ships of Carnival Corporation's Conquest class.) So, if Costa Concordia's design had any shortcomings, those weaknesses aren't exclusive to the ship or to Costa.

A more immediate issue may be the confusion and panic that reportedly occurred after the ship ran aground and began taking on water.

Most of the passengers hadn't yet taken part in a lifeboat drill, because Costa--like its Italian rival, MSC Crociere--often allows passengers to board or disembark at any one of several ports on the cruise itinerary.

Such flexibility is convenient, since it means that (for example) a French passenger can begin and end a cruise in Marseille instead of flying, driving, or taking the train to a more distant port in Italy. But it also means that, if only one boat drill takes place during a seven-night cruise, some of the passengers won't participate in a lifeboat drill until the cruise is nearly over.

Will cruise lines like Costa and MSC, which cater to multiple nationalities, be able to continue the practice of "multiple embarkation ports, one boat drill" after the Costa Concordia incident? Only time will tell.