A photo site for gondola fans 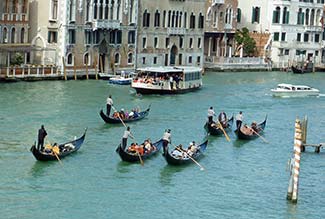 ABOVE: A gondola picture from our own Veniceforvisitors.com.

Today, I discovered that a site with the domain "www.gondolier.org.uk" was linking to our main travel-planning site, Venice for Visitors. I took a peek, and I discovered a site with hundreds of photos and links to other resources (including photos and paintings) about Venetian gondolas and rowboats. If you're a fan of Venetian boats and rowing, click on the link below:

Tip: For practical advice on touring Venice's canals by gondola, read our "Gondolas and Gondola Rides" article at Venice for Visitors. Also see our "Traghetto" article, which describes gondola ferries that offer a quick ride across the Grand Canal for only 50 cents.

BELOW: A video clip of a mini-passenger in a gondola greeting our dog Maggie, who was watching the gondola from a bridge: 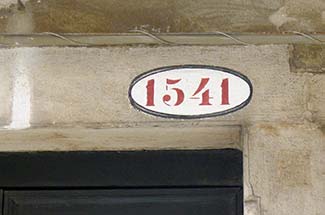 ABOVE: In Venice, you need more than an address to find your destination.

In Venice, we often see tourists wandering around in confusion as they try to find their hotels, B&Bs, or vacation apartments. They've made the mistake of thinking that addresses in Venice are sequential (as house numbers are in most cities), and that an address like "Santa Croce 946"--the address of the delightful Hotel Ai Due Fanali--will help them pinpoint their destination on a map.

Unfortunately, that isn't how things work in Venice:

"Santa Croce 946" simply means that the address is door number 946 in the sestiere or district of Santa Croce. Within a given sestiere, blocks of house numbers are assigned almost randomly, so it's important to have specific, detailed directions when you go looking for a hotel or other building. Once you find your way to the correct street or square, you can look for the number above the door.

For more information about how to avoid getting lost, read "Walking in Venice: Finding your way with maps, directions, and street signs" at Veniceforvisitors.com. 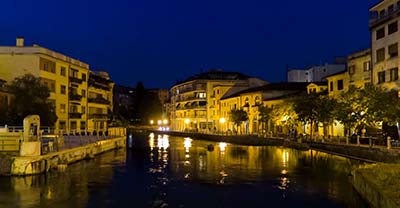 ABOVE: The River Sile in downtown Treviso, Italy, not far from the ATVO bus stop at the railroad station.

Recently, we had an inquiry from a reader who wanted to know if there was a bus from Venice Marco Polo Airport to Treviso, an attractive small city near Venice that's well worth a stay of one or two nights.

The answer is "Yes"--at least for now. ATVO, which operates airport coaches and intercity buses in the Veneto region, introduced a Venice Marco Polo Airport-Treviso bus service in June, 2011. As of this writing, the timetable runs through early December, 2011. With luck, the line will be successful enough to continue operating in 2012.

ATVO's Marco Polo-Treviso coaches run eight times a day in each direction, with a one-way fare of €7. (You can buy a roundtrip ticket for €13; the latter ticket is valid for seven days.)

For more information, including a timetable in PDF format, click here. If our link doesn't work--as it may not after early December--see the ATVO's  Bus Service Venice Marco Polo Airport page and look for "Marco Polo Airport - Treviso" on the list of bus timetables.

This new service shouldn't be confused with ATVO's other airport buses, which include: