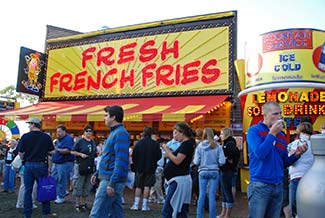 ABOVE: Minnesota fairgoers settle for fried Idaho spuds instead of a fritto misto from the Venetian Lagoon.

You may wonder what the Minnesota State Fair has in common with Venice, and the answer is "Not much, except for the fact that they're both expensive" (though you'll find better deals on food in Venice, where--as a bonus--the gelato isn't deep-fried and served on a stick).

Still, Italians are big on family, and so are we--which means that we consider it both a duty and a pleasure to promote our daughter's new blog, Minnesota State Flair, a.k.a. "your year-round State Fair fix."

When we checked this morning, the lead article was "Get Ready for Greased Lightning at Andy's Grille," which is based on an interview with the restaurant's personable patriarch, Bob Andrus.

Other recent posts have covered such topics as "Canine Carny Cowboys," "Hamline Dining Hall's State Fair Ham Loaf" (from a church-sponsored eatery that's been at the Fair for 114 years), "Harness the Bear Within" (your chance to play Smokey, if you aren't too tall and can take the heat), and "Princess Kay of the Milky Way: Butter Beauties, aka 'Goodwill Ambassadors.'"

The blog is great fun even if you don't live in Minnesota, and we're especially proud of our daughter's hereditary affinity for alliteration.

I am a recovering Minnesotan and current Italophile. Thanks for the link. Brought back great memories of the Fair! I've been gone for 27 years, but when I lived there, I wouldn't miss it.