ABOVE: A free bus arrives at the Panorama shopping center in Marghera.

by Durant and Cheryl Imboden

For serious shopping, most Venetians bypass the likes of Prada, Missoni, and Gucci. They head for local supermarkets such as Conad and the Coop (pronounced "cope"), or--for heavy-duty shopping--to the Panorama hypermarket just outside the mainland port and industrial zone of Marghera, which is served by a free coach from Venice that operates throughout the day.

Panorama is a "big box" store that could be loosely compared to a Wal-Mart or Target Greatland in the United States. (The Panorama chain has 23 stores in the Veneto and neighboring regions of Northern Italy).

In addition to the Panorama hypermarket, the Panorama shopping center in Marghera houses an In's discount grocery store (similar to Aldi), a Benetton outlet (Benetton's corporate headquarters are in nearby Treviso), a SME appliance and electronics store (where Cheryl was impressed by the largest display of steam irons that she'd ever seen), and several other retailers.

Most tourists needn't bother to visit Panorama, but if you're in Venice for weeks or even months, you may find it worthwhile to catch the free shoppers' bus from the Piazzale Roma. You'll save money on basics like pasta and toilet paper, and you'll get to see how ordinary Venetians spend the money that they've earned from rowing gondolas, selling masks, making pizza, or teaching Italian to foreigners.

Where to catch the bus:

The Panorama bus leaves from Piazzale Roma, the large square where buses, cars, and taxis drop off and pick up passengers at the edge of Venice's historic center.

Look for a sign that reads "Auriga Tours S.r.l. on a metal post near the ATVO airport buses, just across from the tram platforms. On the same post, you'll see the Panorama timetable: 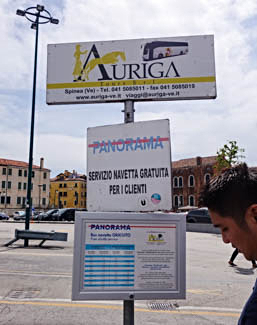 As this post's last update in spring, 2016, the bus ran seven days a week (sometimes with a smaller van rather than a full-size coach).

Click here for a larger and more readable version of this timetable: 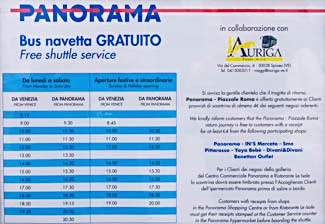 Here are some Panorama bus photos from a previous excursion: ABOVE: In this photo, a Panorama bus has just arrived at the Piazzale Roma in Venice, and shoppers are removing their purchases from the luggage compartment. 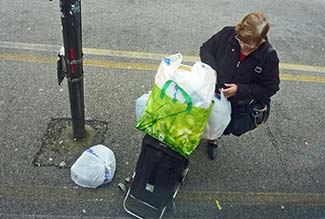 ABOVE: In theory, passengers are supposed to offer proof that they've spent at least four euros at the Panorama center when boarding the bus for the return trip. In practice, the rule is seldom enforced, so this heavy-duty shopper didn't need to show the driver her wad of receipts. 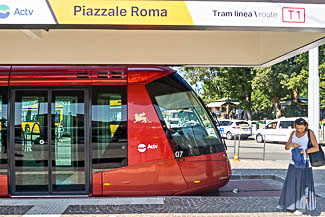 ABOVE: Buses and trams (T1, change to T2) also run from Piazzale Roma to Panorama. But why buy a transit ticket when you can travel for free in a luxury coach?

The free shuttle ( bus navetta) to Panorama DOES run, as always, with the same old schedule. ( As of September 22, 2015). Took it today. The new tram goes to it as well. It is not a non-stop, and takes longer. City buses run to it, but require a change mid-route.

The Billa stores are gone, replaced in most of the same sites by Conad.

Yep, we covered the name change (Billa to Conad) in the supermarkets article on our main Venice for Visitors site.

As for the Panorama bus, where do you catch it? (We've been unable to find it in the Piazzale Roma.)

Robert Fusillo has filled us in on the current departure location (which we've now integrated into the post above):

""Coming from the vaporetto stop, it is just past the tram stop, almost exactly opposite the middle of the tram stop. The bus stop is just a couple of slots down from the Treviso bus, and is marked by a sign, with schedule, on a pole."

April, 2016: We've just updated this post with current information and new photos of the bus stop in the Piazzale Roma.