/>
Home Venice for Visitors Maggie in Venice dog blog
Schoolchildren in the Campo San Polo
Carnival 2011 is over (and none too soon!)

Dead body in a Venice canal 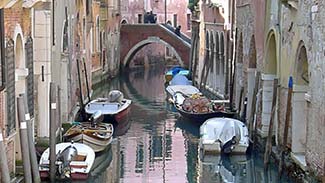 ABOVE: The Jordanian drowning victim was discovered floating upright, with his head half-submerged, in this quiet canal near Venice's Canpo San Polo.

This morning, I saw the dead body of a young man in Carnival costume in a canal between the Campiello Albrizzi (where we're currently living) and the Campo San Polo.

A group of Carabinieri (state police) were standing at the edge of the canal, waiting for a fireboat to come and retrieve the body from the water.

While I was observing the scene, a lady walked by, crossed herself, and looked teary-eyed as she murmured "Che terribile!" before averting her eyes and crossing a bridge.

Later, a report in la Nuova said the victim was a 27-year-old Jordanian restaurant waiter named Albarakat Mohamed who had slipped, fallen into a canal, and drowned. (No signs of violence were reported.)

This was the second canal drowning in Venice during Carnival: The first, which was reported in both la Nuova and Il Gazzettino,  involved a Chinese man who was found in the Grand Canal near the San Marco Vallaresso vaporetto stop. An autopsy hadn't yet been performed on that victim, but the press were speculating that the man may have become intoxicated during Carnival, fallen into the canal, and drowned.

Here's a video that I shot a few hours after this morning's incident to show where the unfortunate Mr. Mohamed's body was found. (I didn't have my camera with me this morning, and I wouldn't have taken photos of the body in in any event, out of respect for the deceased and his family.)