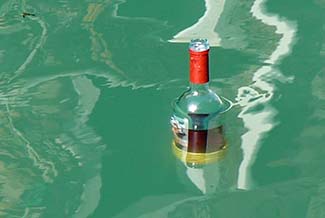 ABOVE AND BELOW: An empty liquor bottle and a discarded Afro wig float in a Venice canal.

After 11 days, two accidental drownings, thousands of broken bottles, and an estimated 160,000 visitors to Venice last Sunday alone, the excesses of this year's Carnevale di Venezia are behind us. Venetians can once again enjoy unclogged streets, and visitors can explore the city without worrying that a drunk yob or yobette will vomit on their shoes.

Nostalgic Venetians reminisce about a quieter time when Carnival was mainly a low-key event for children, or when the reborn Carnevale di Venezia of the early 1980s was more about elegant costumes than rampant boozing. (The fancy costumes are still around, but they csn be easy to miss unless you're near the Piazza San Marco during the day.)

Yesterday, the final event of Carnival 2011 was a midnight parade of candlelit rowboats and gondolas on the Grand Canal. As far as we could tell, not many of the people who had come to Venice for "Fat Tuesday" bothered to watch it: Most  of the Carnival celebrants were too busy drinking, shouting, staggering, and breaking the occasional shop window to have time for a boat regatta.

Our advice: If you can't resist coming to Venice during Carnival, try to spend at least some of your time here before or after the 11-day event, when Venice isn't jam-packed with daytrippers and the party crowd are mostly at home on the mainland.

Addendum: The Carnevale di Venezia is now claiming that a million visitors came to Venice for Carnival. That's nearly 17 times the city's population, and it helps to explain why some streets were nearly impassable on the two weeekends of Carnival. (What's surprising is how good-natured most of the locals and tourists were under the circumstances.) 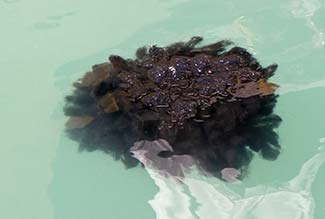 Carnival has changed. We first saw it in 1988 and it was magical and was one of the reasons we fell in love with Venice. We've been to it many times since. The last time we saw it was two years ago and the atmosphere was totally different. I can't pinpoint one thing but something was lost. Ash Wednesday is always a delight in Venice- the crowds have gone and you have Venice to yourself.

We went to the Carnivale last year for three days (I took my wife for Valentines day) we loved it and are glad we went, there were a few drunken yobs around at times, mostly around St Marks, but for the most part we still enjoyed ourselves.

But having said that we would never go back during Carnivale, way too crowded for my liking, I came back in july for a week long painting course and Venice was soo much more pleasant to explore then.

Even with the crowds ect. we have fallen in love with Venice though, and I'll be coming back in October with a group of mature art students for 5 days to sketch Venice :)