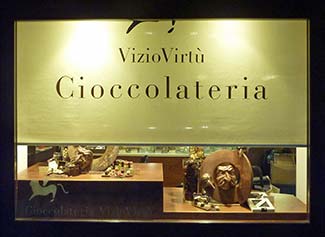 ABOVE: The display window of the VizioVirtù chocolate shop, which was closed during the opening festivities at "VizioVirtù...e altro."

VizioVirtù is a popular high-end cioccolateria on the Calle Campaniel in Venice's sestiere of San Polo. (See its Web site.) Today, the proprietors opened a second shop nearby called "VizioVirtù...e altro." The new store is located on the Campiello San Tomà, a small square just off the Campo San Tomà. It specializes in food products such as jams, French macarons, and other upscale goodies.

"VizioVirtù...e altro" was launched with a grand-opening party on the eve of Venice's Carnival. Here's a short video that offers glimpses of the new shop, invited guests, and members of the public who showed up (some with their dogs):

2015 Update: VizioVirtù has closed. The storefront is now occupied by a branch of Il Doge, an excellent gelato shop whose main store (which we've been visiting for years) is on the Campo Santa Margherita. Be sure to try the limone in hot weather--it's one of our favorite summertime gelato flavors, along with mela verde or green apple.