A car on the Calatrava Bridge 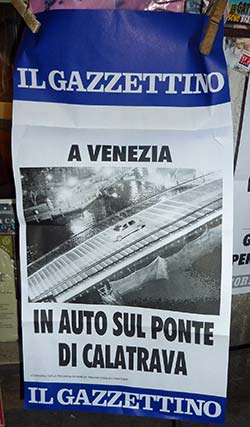 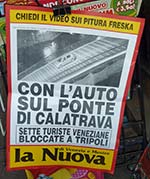 Venice was abuzz this morning with the news that four young people from the mainland arrived at the Piazzale Roma by car, drove over the Calatrava footbridge, continued past the railroad station, and kept going until they reached the Campo San Geremia near the junction of the Grand Canal and the Cannaregio Canal.

The escapade was recorded on a security camera, and you can watch the video below.

According to a newspaper story in Il Gazzettino, three of the car's four occupants have been banned from Venice for three years.

La Nuova also has an article about the illegal stunt and reactions by Facebook fans to the driver's behavior, which we'd characterize as a stupid tourist trick.