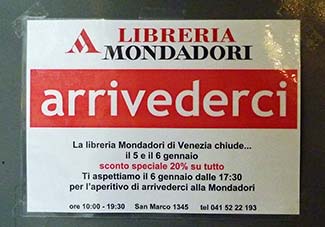 ABOVE: A sign on a column outside the papered-over display windows of the defunct Libreria Mondadori in San Marco.

On January 6, 2011. the Libreria Mondadori--Venice's largest bookstore--ended a going-out-of-business sale, served a farewell aperitif to staff and customers, and closed its doors for the last time.

The three-story shop, which had opened in 2004, was a welcome presence in a neighborhood of overpriced designer stores. It also was convenient for tourists, thanks to a large selection of Venice books in several languages and a location on one of the San Marco district's busiest thoroughfares. Although Venice does have other bookstores that are useful to international visitors--such as Libreria Studium, Libreria Marco Polo, and Libreria Acqua Alta--the Mondadori bookstore filled an important niche. We're sorry to see it gone.