/>
Home Venice for Visitors Maggie in Venice dog blog
Tourists on the run in Venice?
Need to pee? Prepare to pay. 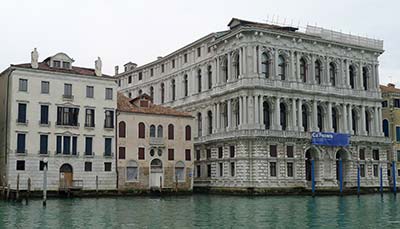 ABOVE: Johnny Depp's Palazzo Donà Sangiantoffetti (center) is dwarfed by its neighbors on the Grand Canal.

Italian news media are now reporting that Johnny Depp has forked over 10 million euros (about 13.5 million U.S. dollars or 8.5 million pounds sterling) for the Palazzo Donà Sangiantoffetti, a 17th Century building next to Ca' Pesaro, a larger and arguably more beautiful palace that houses the city of Venice's Museums of Modern Art and Oriental Art.

Compared to its neighbors, the Palazzo Donà is barely more than a cottage, albeit an expensive one. Still, that's adequate for a weekend pied-à-terre, and we suspect that the actor's new digs on the Grand Canal will be more than comfortable enough for his family and entourage once renovations are complete.

Below is a video (shot today) that shows the Palazzo Donà, views from an adjacent pier on the Grand Canal, the tiny corte behind the palazzo, and the narrow pedestrian passages that connect the house and its neighbors to the heart of Venice's sestiere or district of San Polo.

(The Bearded Collie in the video is Maggie, star of the Maggie in Venice dog blog, who has been on the trail of Johnny Depp since he filmed The Tourist in Venice with Angelina Jolie last year.)

Thanks for posting this. When I read that Depp had bought it, I Googled the palazzo's name but found nothing. Looks a bit grim at the rear but I guess it's been unoccupied for a while. He'll have to get the paintbrush out! Returning to Venice at the end of Feb for a few days - can't wait!

My friend David and I are going to Venice in February!! I will be taking a special Valentine card for the beautiful Signore Depp!!:)