How to buy train tickets at Venice's railroad station 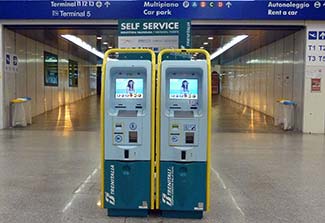 ABOVE: These Trenitalia ticket machines are in the railroad station at Rome's Leonardo da Vinci Airport. You'll find similar or identical machines in Venice Santa Lucia and other train stations throughout Italy.

A few days ago, we published an article at Rome for Visitors that may be useful if you're catching a train in Venice:

The illustrated piece is a how-to guide to Trenitalia's "Fast Ticket" machines in Italian railroad stations, and its step-by-step instructions will be helpful whether you're buying tickets in Venice's Stazione Santa Lucia, Mestre, Florence, Rome, or another location in Italy.

It's worth noting that stations in larger cities (including Venice) also have regional ticket machines that work differently--and more simply--than the Trenitalia versions. Our article focuses on the Trenitalia machines, which issue tickets for Italy's national rail network and--in some cases--for regional trains as well.

To read our step-by-step guide to using a Trenitalia biglietteria automatica, see "Trenitalia ticket machines" at Rome for Visitors.


ABOVE: The Eastern Med comes to East Mid.

We love a good publicity stunt, so we're happy to announce that bmibaby, the British budget airline, recently staged its second "enterplanement" event of the season on a flight from the UK's East Midlands Airport to Venice Marco Polo Airport.

The event started with a performance by actors from Venice's Teatro San Gallo, who entertained passengers at the departure gate of East Midlands Airport with scenes from their long-running show Venezia.

Once the plane was in the air, violinist Matteo Mesini of the Collegium Ducale orchestra performed excerts from Vivaldi's The Four Seasons for a captive but appreciative audience.

Most bmibaby flights don't feature "enterplanement," but who knows--maybe you'll get lucky and see Johnny Depp and Angelina Jolie performing a live love scene from their forthcoming movie, The Tourist, on your next trip from East Mid to VCE.

For information on bmibaby's service between East Midlands Airport and Venice, go to the Venice timetable page at bmibaby.com.