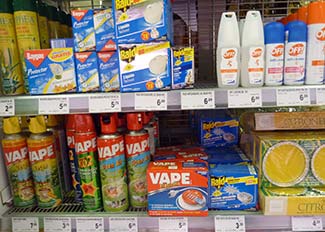 PHOTOS: Mosquito repellents, candles, and coils at a Billa supermarket in Venice.

Mosquitoes, (in Italian, zanzare) are a common annoyance in Venice from spring through early fall. The first mosquitoes of the 2010 season appeared a few weeks ago, when it was hard to sleep with the little creatures flying into our bedroom from the living room (where they'd entered through an open window overlooking the garden) and buzzing in our ears.

By the second or third night of the zanzare season, we were covered with small welts from mosquito bites, but--oddly enough--the bites didn't itch nearly as much as bites from mosquitoes in our part of the U.S. do.

Fortunately, Venice's retailers have been ready for the spring crop of zanzare with supplies of canned mosquito repellent, citronella candles, and mosquito coils--including a brand of coil or spirale called "Vulcano" (shown below) that evoked memories of the Icelandic ash attack that disrupted European air traffic in April. 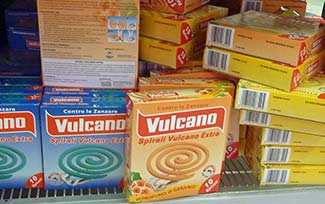