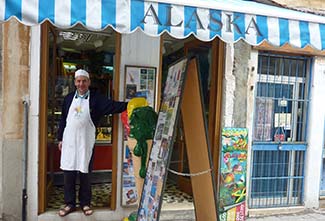 The Gelateria Alaska is one of Venice's most highly-regarded ice-cream shops, for several reasons:

Alaska is off the main tourist circuit, but it's within easy walking distance of the railroad station and the Piazzale Roma. Look for the Gelateria Alaska on the Calle Larga dei Bari in Santa Croce, a few streets to the west of the Campo San Giácomo del Orio. (It's just north of the Campo N. Sáuro, which you should be able to find on any decent map.)