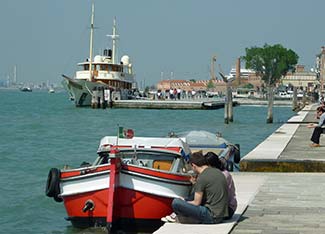 ABOVE: A Venetian boat upstages the yacht Vajoliroja in Venice..

Since posting a photo and video clip of Johnny Depp's yacht in Venice yesterday, we've learned (via a forum post on Joliepittwatch.com, which linked to our blog) that the Vajoliroja didn't arrive in Venezia until Sunday because it was being used by director Tim Burton and his family. Depp has acted in seven of Burton's movies, starting with Edward Scissorhands, the 1990 film that made Johnny Depp a star.

This afternoon, Cheryl grabbed a quick video of people boarding the Vajoliroja. They could have been members of Johnny Depp's posse, or--for all we know--they might have been going on board to fix the plumbing. We'll let the celebrity-watchers sort out their identities: