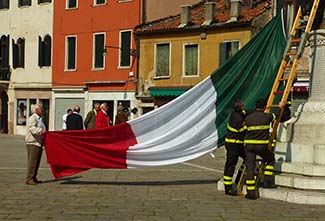 ABOVE: Members of the Vigili del Fuoco, or Fire Brigade, prepare to raise the Italian Flag on the memorial column and flagpole in Venice's Campo Santa Margherita.

April 25th is Liberation Day in Italy. The national holiday, called Festa della Liberazione in Italian, celebrates the fall of the Mussolini regime in 1945.

In Venice, as in most Italian cities, veterans and history-conscious citizens organize ceremonies to remember the day of liberation and those who died during World War II.

This morning, when Durant was out for a walk, he saw members of the Vigili del Fuoco hauling ladders from their fireboat in the Rio San Barnaba. They didn't seem to be in any great hurry, so Durant followed them to the Campo Santa Margherita, where the reason for the ladders became apparent: The firefighters had been brought in to raise the flag for a neighborhood Liberation Day ceremony. The short video below chronicles the event: