Wednesday, March 10: Today is a snowy day in Venice--an event that isn't typical for March, and which we've chronicled in this photo essay: 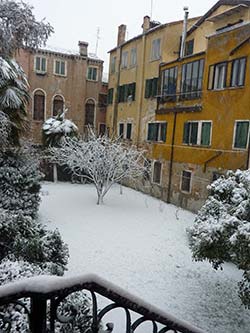 When we woke up this morning and looked out the window, our back yard was already covered with snow. 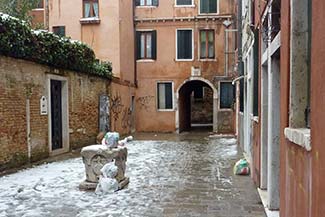 The corte in front of our small apartment house also had a layer of snow, although some of it had turned to slush during a lull in the storm. 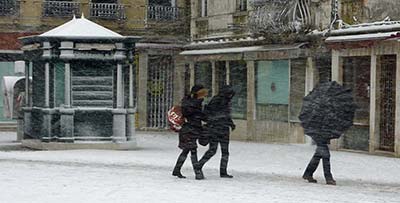 A few blocks away, in the Campo San Barnaba, commuters were leaning into the wind and fighting to keep their umbrellas under control. 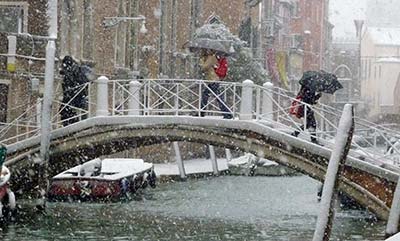 Other Venetians and tourists braved the salted but slush-covered steps of the Ponte dei Pugni. 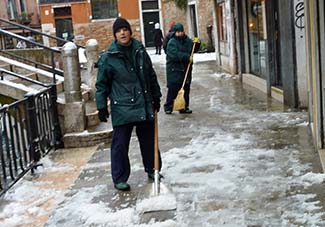 Later in the morning, Cheryl photographed these sanitation workers as they shoveled and swept snow from a fondamenta. (Normally the workers collect garbage during the morning hours, but snow removal took priority during this late winter storm.) 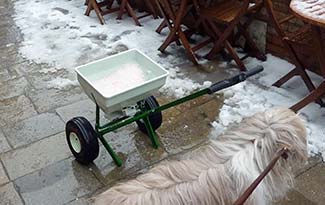 As they walked around Venice's sestiere of Sorsoduro,  Cheryl and Maggie noticed that the gondolas at the local squero, or boatyard, had a layer of snow. 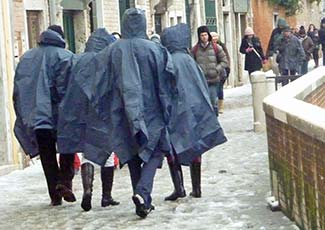 On the other side of the Rio di San Trovaso, a group of pedestrians in matching hooded ponchos looked like characters from a Dan Brown novel. 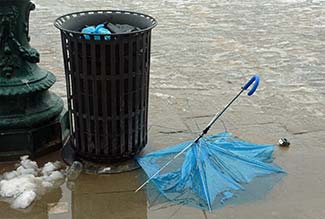 Not far away on the windy Zattere, which faces the Giudecca Canal, a broken umbrella (one of many seen today) lay abandoned next to a public trash container. 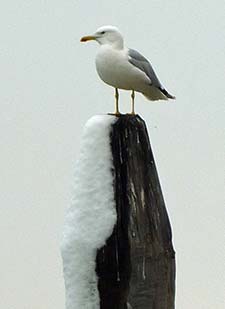 Undeterred by the snow, a gabbiano (seagull, or cocal in Venetian dialect) surveyed the Zattere from its perch atop a snow-clad bricola or wooden piling. 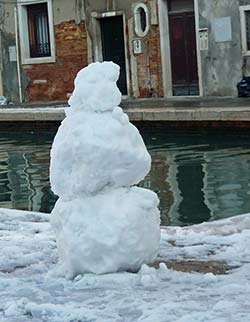 Addendum: Around 10:30 p.m. on Wednesday, we took our dog for a walk and found a pupazzo di neve in the cold, dark, and deserted Campo San Barnaba.

The snowman was still there on Thursday morning, when the photo above was taken, although the sun was out and the layer of snow covering the campo had started to melt. (You can see life returning to normal after the March snowstorm in our video clip, A Snowy Morning in Venice.)

Oh wow. Have you ever seen snow there before? crazy!

I've linked to your blog.

If you post any more pictures, I'd be interested. Venice was my late wife's favourite city and she'd have loved them. I do too and wish I was there to add them to my collection.

We are arriving in Venice on Monday, hoping to get away from snow! Oh well, it will be lovely, anyway... ;)

Bettina, Weather.com is predicting springlike weather in Venice for most of next week, so I doubt if you'll need your snowshoes or skis. Already today (Thursday), the snow is melting off quickly, and people were eating gelato outdoors and sitting at cafe tables this afternoon. With luck, you won't have to face anything worse than a rain shower during your visit!

Please advice us if weather in Venice already sunny and warm. We fly tommorow and now think over what type of clothes take with us :)
Most important if ground wet or dry because my wife going travel in leather's shoos.

As of Sunday night, the streets in Venice are dry (except for the odd tiny puddle here and there) and the temperatures are moderately cool. It's supposed to warm up in the next few days, with no showers in the forecast until next weekend. With luck, it will feel like spring by the time you're ready to go sightseeing!

Wow, this is nice pictures.Venice was my late wife's favourite city and she'd have loved them.
הסעות

Hey. Thank you for eve photos! In Lucca now and was planning to go to venice tomorow, but the son I moving down! Is it worth it to travel out here? I think it would be, but my buddy does not. Thanks for your time and recommendations!

Venice is always worth visiting. And if it's any consolation, our "Snow in Venice" video was taken a while back!

Venice is such a beautiful city even if it rains or it snows. I would really love to visit there someday but hopefully on a much more brighter and better climate. It would definitely be a lot more convenient to do sightseeing under a clear sky, right? I don't have anything against snow but I think Venice would be a lot more prettier in spring.