"Love padlocks," a fad that reportedly began in the Hungarian city of Pécs during the 1980s, have been a phenomenon in Italy since 2006, when--according to an archived New York Times story--lovers began chaining padlocks to a bridge in Rome and throwing away the keys after two best-selling novels and a subsequent movie popularized the idea.

The fad has spread to Venice, where padlocks (though blessedly few in number) have been attached to railings on the Ponte dei Scalzi, the Ponte dell'Accademia, and a handful of other bridges.

If you see padlocks like the ones below when you're in Venice, you can credit--or blame--Federico Moccia, author of Tre Metri Sopra il Cielo (Three Meters Over Heaven) and Ho Voglio di Te (I Want You): 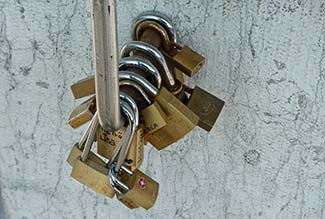 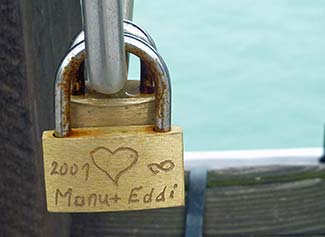