The Sound of Sirens 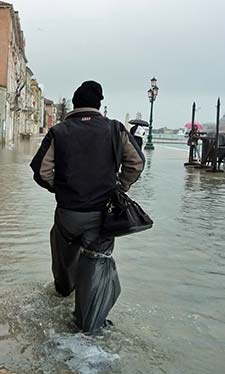 ABOVE: During acqua alta, necessity is the mother of improvisation.

No, the title of this post isn't a misspelled homage to Simon and Garfunkel--it refers to the alert sirens and warning tones that tell Venetians and visitors when acqua alta flooding is on the way and what level of inundation to expect.

Several hours before a flood tide, you'll hear one blast on a World War II-style air-raid siren followed by a series of warning tones that forecast the expected water level at high tide:

Note: The tones may be repeated two or more times, so don't assume the worst if you hear two or three sets of tones with gaps between them.

What to do when you hear the sirens:


To hear samples of the initial acqua alta warning siren and the tones that indicate what tide level to expect, click here and scroll down to "Scarica i Segnale" for links to sound files in MP3 format.

Item 3 in this article is telling people to break the law. It is illegal in Venice to purchase goods for unlicensed stret sellers, most hotel staff send them on their way with the threat of calling the police. A better suggestion would have been to take a couple of black bin liners and elastic bands to cover shoes and make your way to the nearest shop to buy a pair of Wellington boots 15 Euro ( if your say is 3 days or longer) otherwise the plastic emergency boots can be brought from most shops for 8 euro, in comparison to 10-15 euros charged by unlicensed traders.