Paparazzi on the Grand Canal

Angelina Jolie and Brad Pitt are in Venice with their children for several months. Ms. Jolie will be starring in a film, The Tourist, which is scheduled to begin shooting on March 15.

As you might expect, the paparazzi have been tailing Hollywood's most pressworthy couple during their stay, and this afternoon we witnessed a chase scene involving Brangelina's water taxi and two teams of celebrity photographers on the Grand Canal.

Cheryl took these photos from the Rialto Bridge as we were returning to our apartment from a walk with Maggie, the star of Maggie in Venice:

As stunned tourists and shocked Venetians watched in horror, two boatloads of paparazzi tried to follow the stars' water taxi as it escaped down a side canal, the Rio della Fava, from the Grand Canal (where Angelina and Brad are renting a palazzo). 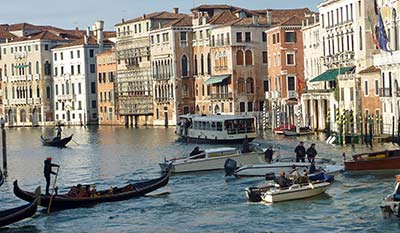 In a display of the most reckless driving that we've ever seen in Venice, the celebrities and their pursuers cut off several other water taxis and small boats, including these gondolas on the Grand Canal.

The frustrated photogs (in the two white boats flanking the wood-veneered water taxi at right) were left in the lurch when their quarry's private water taxi disappeared down the side canal. One of the paparazzi boats reversed out of the crowded rio as its pilot sought another route.

In this 100-percent crop from the larger  photo above, you can see the cameras in the lensmen's hands.

Note: Cheryl took several more photos, but out of respect for the star family's privacy, she deleted any images of flagrant celebrity behavior that might have found their way onto the covers of tabloid newspapers. (Brad and Angelina, if  you're reading this, Maggie would love a role as an extra in your movie--and if you can get Johnny Depp's autograph for her, so much the better.)

I live in Los Angeles, and I am so sick of the Paparazzi harassing people and making scenes as well as causing dangerous situations.
I applaud your wife for deleting from her camera any photos that would display any behavior that would be seen as flagrant.
I see celebs all of the time in the malls, on the streets, etc, I just say hello with a big smile and they are often times just as warm to me. There have been times that I have been talking to one at a market or something and realize who they are. I simply compliment their work or something, and move on. They are usually with their kids or something when I see them and I respect that.

Way to capture the story Durant and Cheryl! This blogging has officially turned into high action journalism! I'm definitely sharing this one on facebook.

it makes me so mad to see how reckless those pesky paps are. One of these days they'll cause another accident like Princess Diana and then what. I especially get mad I see how they hound Brad and Angelina. They don't stop even when the children are with them.