Deliveries in Venice: Not a job for the weak

Venice is often criticized for its high prices. The criticism isn't entirely fair (we've found that some daily necessities are actually cheaper than they are back home), but it's true that, in Venice's historic center, prices tend to be higher than on the Italian mainland. If you want to know why, these pictures should make things clearer: 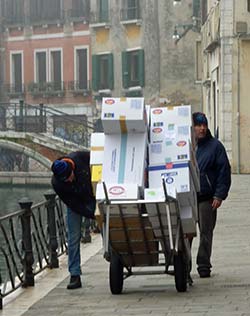 In Venice, most deliveries are made by small boats and barges--and by people (usually men) with carts who haul goods from the canal to the shop, home, or other destination.

We've seen delivery barges carry everything from spools of cable and construction materials to household appliances and photocopiers. A few days ago, we watched two men push a baby grand piano down the street on a dolly after unloading it from a barge.

In the photo above, two deliverymen are rolling a cartload of merchandise along the Fondamenta Rio Marin, a few blocks north of the Frari church. 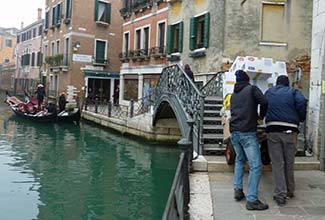 When the men reach a bridge, they wrestle the cart and its load onto the first stone step. 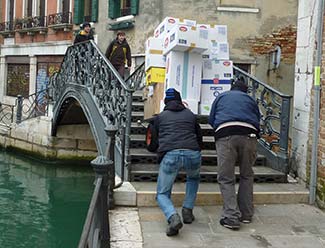 Fighting gravity, they hump the cart onto the metal steps of the bridge. 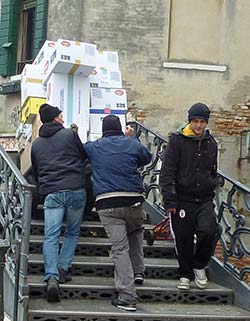 They continue to heave the cart from step to step as another man passes from the opposite direction with an empty dolly. 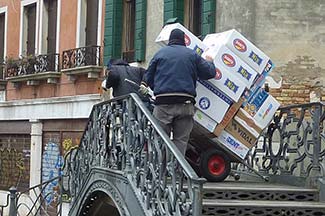 At the top of the bridge, the deliverymen turn the cart around for the trip down. They'll repeat this process on as many bridges as they need to cross until they reach the customer's address.

Getting around isn't easy for wheelchair users and seriously ill residents of most cities, but in Venice, the challenge is complicated by the hundreds of footbridges with steps that cross the city's canals.

To visit medical clinics, attend sporting or cultural events, and do other things outside of their immediate neighborhoods, many mobility-impaired Venetians rely on the transportation services provided by local agencies and Sanitrans S.r.l.

Sanitrans has a small fleet of idroambulanze (water ambulances) and special boats that are equipped for people in wheelchairs. Disabled citizens or people who require medical care in transit can book boat transportation online.

Cheryl took these photos of Sanitrans crews picking up clients in the neighborhood around Ca' Foscari University and the Campo Santa Margherita in the sestiere of Dorsoduro: 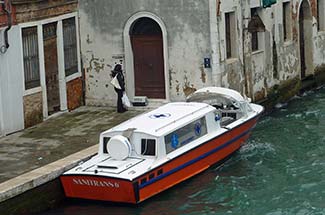 A Sanitrans boat moors along the Rio di Ca' Foscari just off the Grand Canal. (This boat was one of two that arrived at approximately the same time.) 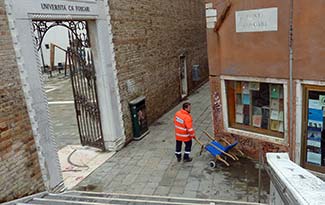 While the pilot stays with the boat, his colleague rolls a special wheelchair to the client's location.

(Note: The gate at left opens onto the courtyard of Ca' Foscari University, which offers inexpensive tours of the restored Doge's palazzo that serves as its headquarters.) 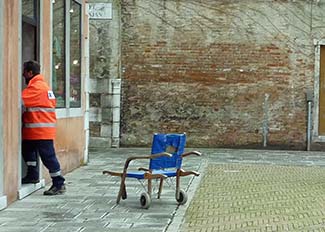 The Sanitrans crewman goes into a shop on a nearby square, where his client is waiting. 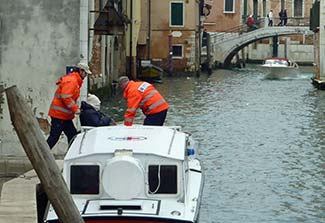 Meanwhile, another client is being loaded onto the second Sanitrans boat for travel to a doctor, senior center, or other location.

Posted at 08:00 AM in Transportation, Venetian Daily Life | Permalink | Comments (0)

The 55-second video clip below shows the Campo Santa Margherita at noon in late February. While church bells peal, the camera pans to show life in the campo--including children playing, students hanging out, local residents and tourists passing through the square, people sitting on benches, produce vendors, and at least one telefonino user who's talking to someone on her cellulare.

For another recent video involving Venetian church bells, see The Bells of San Nicolò on our Maggie in Venice blog.