It's 'Fat Tuesday'--Farewell to Carnival!

Today (February 16) is Martedì grasso or "Fat Tuesday" in Italy--the last day before Lent, and the final day of Carnival.

As of 9 p.m. Venice time, the crowds of mainlanders and other daytrippers have mostly gone home, although the Campo Margherita is still filled with students and the final "DJ Set" of the season just began blasting through our living-room windows.

(Addendum: Since we published this post nearly two hours ago, the crowd has grown into a cast of thousands--easily the largest and loudest mob of happy, alcohol-fueled young Carnivalgoers that we've seen all week.)

Here are some last-minute photos to close out our Carnival coverage for 2010: 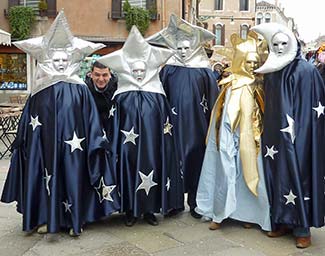 Cheryl grabbed this shot on the Strada Nova (part of the main pedestrian route between the railroad station and the Piazza San Marco), where a tourist was posing behind the performers in their star, sun, and moon costumes. 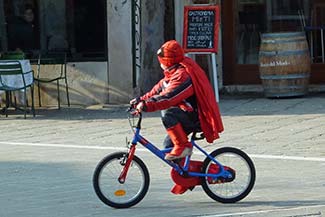 In the Campo Santa Margherita, a boy in a Spiderman outfit celebrated his freedom with a bike ride. (Schools were closed yesterday and today in the final run-up to Lent.) 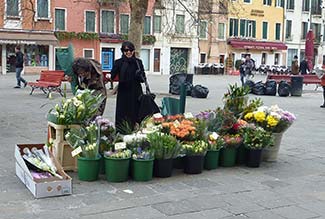 In the same campo, a flower seller was hoping for some last-minute Carnival trade. 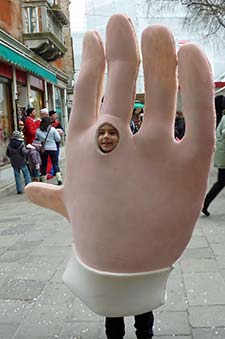 Near the Frari Church, a child in a hand costume offered a digital greeting... 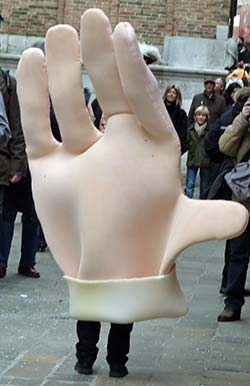 ...then waved good-bye to us and to the 2010 edition of Carnevale di Venezia.