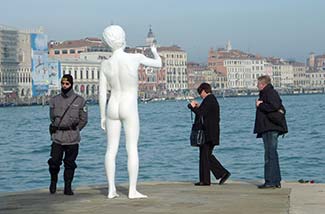 ABOVE: A statue (and its accompanying security guard) at the Punta della Dogana, where Cheryl shot the video footage below.

Rowing is a popular sport in Venice, and a number of rowing clubs offer memberships for surprisingly reasonable fees (20 euros a year or less, according to a Venetian who's familiar with the local rowing scene).

The video below shows two boats: one with a four-man rowing crew, and a smaller boat with two oarsmen. You'll notice that the oarsmen row in a standing position, like gondoliers, instead of being seated. This makes it easier for them to see mudflats and other obstacles when rowing outside dredged boat channels in the Venetian Lagoon, which can be extremely shallow at low tide.

The video may seem a bit long if you have only a passing interest in rowing, but we've resisted the urge to shorten it because it shows the Venetian rowing technique from several angles, it offers nice views of Venice landmarks (including the Grand Canal, St. Mark's Basin, and the island church of San Giorgio Maggiore), and boat enthusiasts will catch glimpses of Venice water buses, Alilaguna airport boats, a Lido-Tronchetto car ferry, and other water craft. (If you listen carefully, you can eavesdrop on the conversations of Italian families standing nearby.)

Location: Cheryl took this video footage from the promenade alongside the Dogana di Mare customs house in Dorsoduro, where the Grand Canal and the Giudecca Canal meet at the Basino di San Marco.

Tired of canals? Try a 'via ferrata.' 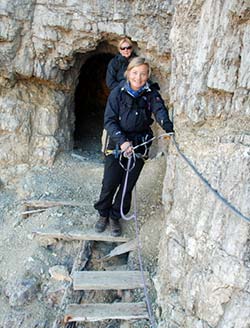 Dolomite Mountains, an adventure-travel company based in the rugged mountains north of Venice, offers climbing treks along the "vie ferrate" or "iron roads" that were built by Italian and Austrian alpine troops in World War I. Tours start in Cortina or in nearby Alta Badia, which are several hours away from Venice Marco Airport by rental car or bus.

The via ferrata adventures are claimed to be suitable for any healthy person who isn't afraid of heights. (We haven't tried them ourselves, since we suspect that our dog Maggie--featured in our companion blog "Maggie in Venice"--wouldn't be an ideal climbing companion and we don't want to leave her at home.)

For more information and photos, see "Climb a 'via ferrata' in the Dolomites" in our EFVblog about European travel and cruising.

A vaporetto tow on the Grand Canal

Cheryl grabbed the video footage below while walking near the Rialto Bridge. The video shows two vaporetti lashed together and heading down the Grand Canal with a police boat running interference.

After the two water buses disappear from view, another vaporetto--a late model without the traditional bow seating--cruises into the frame.