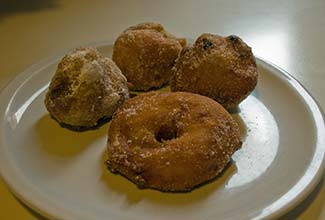 ABOVE: Frittelle from Tonolo, one of Venice's most celebrated pastry shops. Starting clockwise from left, the varieties shown here include cioccolate, zabaione, veneziane, and mele or apple. INSET BELOW: Interior views of a frittella veneziana and a chocolate-filled fritter.

Frittelle, or fritters, are the most famous dolci or sweets of Venice Carnival. (They're followed closely in popularity by galani, the crisp, airy pastry strips that are known as chiacchiere, chiacchere, crostili and other names elsewhere in Italy.)

Frittelle begin showing up in pastry shops, bakeries, and snack bars during the weeks leading up to il Carnevale di Venezia. When Carnival is over, frittelle disappear from the store windows almost as quickly as tourists in masks or cheap plastic cow costumes vanish from the Piazza San Marco.

Like doughnuts or crullers, frittelle come in a variety of styles, both filled and unfilled. At Tonolo, which may be Venice's best-known pasticceria, the available choices usually include:

Frittelle veneziane. No filling, but with raisins and pine nuts mixed into the fairly heavy dough. After frying, the frittelle are rolled in granulated sugar.

Frittelle con mele. These are quite a bit different from the other varieties: For each fritter, a thick ring of apple is covered in batter and fried. Instead of being more or less spherical like other frittelle, an apple frittella looks something like a doughnut, with a flattish shape and a hole in the center.

Note: At some pastry shops and bakeries, cream-filled frittelle are rolled in confectioner's sugar (or left uncoated), with only the classic veneziane version being covered in granulated sugar. Ricotta cheese is another common filling, and a bar near the Accademia Bridge serves a non-traditional but popular Nutella version.

For another take on frittelle, with pictures, see Karen Henderson's post in her "The Venice Experience" blog.

I remember being in Venice for Carnival a few years ago and REALLY enjoying fritelle. On Ash Wednesday we went back to the baker's for another fix only to be told that carnival was over and so were the fritelle. Always grab a fritelle when it's available. Andrew